Developer Insights: Chen and his Brew

It’s time for another Developer Insights in which we explore a hero’s design and mechanics. This week, we’ll be focusing on a hero from the Warcraft universe. Join us for a chat with Game Designer John Hodgson about the Pandaren Brewmaster, Chen. 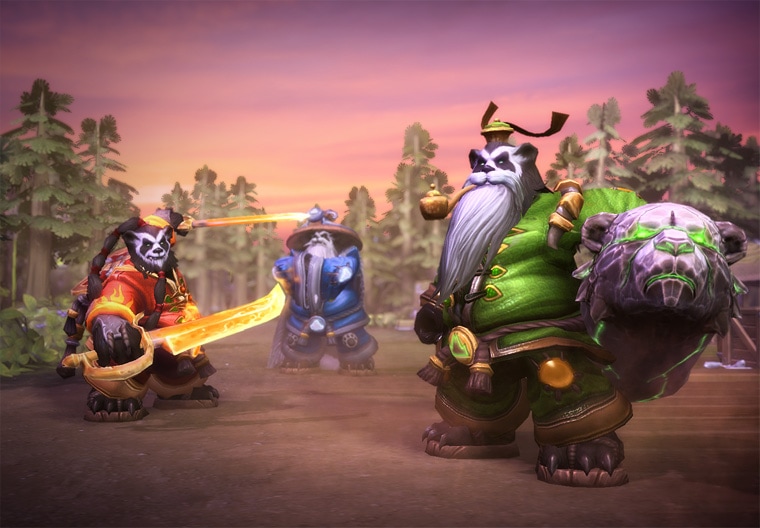 Trikslyr: Chen is known for his loyalty to family, wisdom, and toughness in battle. What were some of the traits the team wanted to focus on when Chen was designed for Heroes of The Storm?

John: Chen was featured in Warcraft III: The Frozen Throne and the Mists of Pandaria expansion for World of Warcraft. Both titles had a ton of cool elements that we drew from to build a fun and exciting kit for Chen in Heroes of the Storm. The goal was to stay loyal to his offbeat feel and iconic abilities from Warcraft III, while incorporating a lot of the agility and explosive power we saw in the Mists intro cinematic. We also included traits from the Brewmaster Monk specialization in WoW.

For Heroes of the Storm, we felt Chen would fit best as a Warrior: he protects his allies and his home, standing his ground in the face of terrible, terrible damage. But, as we might expect from Chen, he’s going about the Warrior role with his own unique style: it’s about combos, misdirection, and maybe sharing a drink with your allies and your enemies. All of these elements were the standards we tried to uphold going into Chen’s development.

Trikslyr: Chen’s arrival brings a new type of resource into the mix, Chen’s Brew, which ties directly into his trait. The trait allows Chen to replenish Brew by standing still and taking a drink from his keg. What was the design team trying to accomplish with such a demanding trait?

John: Like all our Heroes, Chen’s design was a combination of chasing a specific fantasy „feel“ and trying to explore new mechanical space. The fantasy behind Chen’s trait was heavily inspired by Jackie Chan in Drunken Master, where Chan’s character plays a scrappy martial arts student whose goofy fighting style is fueled by strong drink in the middle of a fight.

From there, we brainstormed about the mechanics: what can we do with Chen’s affinity for brew? How would it feel to „take a break“ in the middle of combat? Can we make a rhythm out of that, sort of like a rotation in WoW? What would it be like for players to be in full control of their resource bars?

Fortifying Brew is the pivot that the rest of Chen’s “kit” revolves around. Chen’s Brew replaces Mana; Brew doesn’t regenerate normally and it comes from a much smaller pool, but Chen can recharge himself by drinking from his keg. Chen also shields himself while drinking, which really helps him tank through fights and come out stronger than ever. Players who learn to harness Fortifying Brew as both a defensive tool and fuel for his offensive abilities will be well on their way to mastering Chen – it’s a matter of timing and discretion, a task fit for a wizened Brewmaster.

Trikslyr: Chen has two strong heroic abilities. Storm, Earth, Fire, harkens back to Warcraft III with Chen splitting into three elemental forms. Wandering Keg allows Chen to hop into his barrel and knock his enemies around. These heroics are very different from each other, so what was the design team trying to accomplish with each?

John: We wanted both heroics to suit Chen as a melee Warrior Hero. Broadly speaking, that includes mechanics like increased health, shields, and crowd-control like stuns and slows, which are all features that suit archetypes like „tank“, „brawler“, and „defender.“  And of course, as with all of our heroics, we tried to make them as epic as possible.

Storm, Earth, Fire was an obvious fit: not only is it a fantastically iconic ability from Warcraft III, but it was easy to grasp that transforming into the elemental spirits granted three fresh health bars, and Chen could continue the fight. Despite the clear concept, it took us a while to nail down a solid ability set and control scheme for the spirits, but finally we landed on a powerful, mobile, and chaotic heroic.

Wandering Keg started as a gap-closing ability (also important for melee Warriors), but then we tried the idea of bouncing enemies around as the keg hit them. The design team thought it was hilarious and had the capacity to be very powerful. Skilled Chen players can knock away dangerous enemies like Kerrigan and Diablo, or try and knock isolated enemies toward their team. Both of these results fit right in with Chen’s role of protecting his team and generally causing mayhem.

Trikslyr: There has been some concern with the lack of an ability to micromanage the spirits while using Chen’s Storm, Earth, Fire. Some players have asked why the decision was made to have Chen’s three spirits move as a group, as opposed to allowing each unit to be controlled separately. Can you shed some light on the subject?

John: With Storm, Earth, Fire, we wanted to capture the concept of “chaotic fun” without being overly complicated or confusing to the Chen player. For a long while, we iterated on a multiple-control scheme where the player could control the three spirits individually. Playtesting consistently revealed that players felt it was too confusing to tackle a new control scheme and new ability sets in the short span of time after the heroic was activated. Players had been playing with one set of abilities for the first 10 minutes of the game, and suddenly had to re-learn new controls! Increasing the duration of the ability helped a bit, but many players then became frustrated with being blocked from using Chen’s consistent, normal abilities (particularly as the spirits were killed off – they had less to play with!) Something had to give, and so we axed multi-unit control and focused on making a consistently epic, powerful moment for the Chen player.

Even though it didn’t work out for Chen, we gained a ton of design practice and technical iteration with multiple-unit control, and we believe we now know how to make it work. I think it’s safe to say that players who want the challenge of controlling multiple units at the same time won’t have to wait too much longer!

Trikslyr: John, this is your first time joining us for Developer Insights, and we have a tradition of ending our last question with a fun anecdote about the hero we’re chatting about. So, let’s hear it: Could you share some a crazy or fun moment that occurred while creating Chen?

John: Chen was a blast to design, build, and play. His heroics had some particularly awesome bugs during development: Once, we had a playtest where Chen was trapped by an immovable enemy unit while he was in his Wandering Keg. We were testing a new talent where he would increase movement speed (with no cap) every time he hit something, and he ended up hitting the unit hundreds of times before it finally died… Chen rocketed across the map at something like 10 times his normal move speed, then spun around, flying up and down a lane as the player struggled to control him! We loved it enough to keep the talent, but had to cap the move speed bonus for the sake of our sanity.