Our latest zone preview takes us into the expansive hills and rocky outcroppings of Nagrand, a verdant land located west of Talador and south of Frostfire Ridge. Here, great beasts cause the ground to quake beneath their feet, and the wolf riders of the Warsong—the legendary orc clan led by Grommash Hellscream himself—are always on the prowl. But they’re not the only ones who make this verdant land their home. We sat down with Senior Game Designer Eric Maloof and Associate Game Designer Kurt Sparkuhl to learn more. 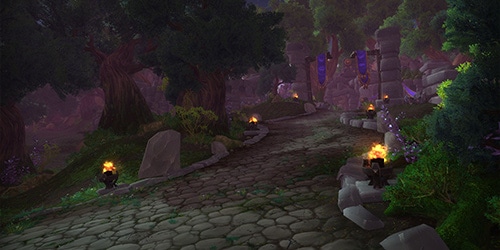 Q. How is the Nagrand of Draenor different from the Nagrand people know from Outland? What’s the story in this zone?

Eric Maloof: I think players will find that the Nagrand of Draenor isn’t really all that different in spirit from the Nagrand of Outland. There are some obvious physical differences—for example, the floating islands aren’t there anymore—but you’ll easily be able to see where those floating islands came from. We very much wanted to respect what people really enjoyed about their experience in Nagrand in The Burning Crusade and capture that, while still providing a twist to what you’ll experience there.

You’ll be led to Nagrand by a quest you’ll receive in your Garrison that involves sending new supplies to the front. The Alliance and the Horde—not working together, of course—are trying to establish a toehold in the zone in order to take on the Warsong clan. The Warsong clan has had problems with the ogres in the past, but they’re really the top power here.

Kurt Sparkuhl: Players will also have the opportunity to return to the Throne of Elements. Without spoiling too much, the elemental balance has been disrupted, and the elementals upon the plateau have become unstable. It will be up to players to unravel the mystery behind the disturbance before it’s too late.

One of the things that sets Nagrand apart from any other zone is the amount of character-focused stories you’ll encounter. The zone is just filled to the brim with story. There’s the main story and what’s going on in the Throne of Elements, but we’ve added in a lot of additional Easter eggs and tons of cameos and backstory on old favorites, so keep an eye out as you go through the zone. You’ll also meet a new faction here.

Q. How would you describe the zone’s ambience? What’s it like?

Kurt Sparkuhl: It feels like old Nagrand. Out of all the zones, it’s the one that’s supposed to feel the most familiar. When Draenor became Outland, Nagrand was probably the area affected least by the world breaking apart. Now you’ll see all these big canyons and rocky outcroppings all over the zone, implying that after the big explosion happened and Draenor turned into Outland, those floating islands were kind of what was left of those big ridges. There was a conscious effort to make it feel familiar to some extent, while still creating something new.

Eric Maloof: You’ll encounter a lot of new points of interest in this version of Nagrand. There are some things that are no longer there, too—Halaa and Garadar, for example, don’t exist. These were created after Outland became what it did. Highmaul takes up a large portion of the zone, and it houses a Raid instance as well. It’s massive. 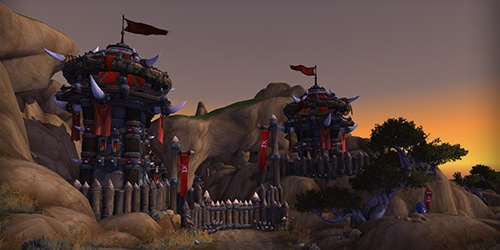 Q. Which locations would you say are some of your favorites, and why?

Eric Maloof: This one’s tough. There are so many good places to choose from. I’m definitely partial to Lok-Rath. It’s located outside the main Warsong base and is the Warsong clan’s main presence in the zone. I like the story of what’s happening there and the dynamic change in the questing once you get there. Plus, it’s a beautiful Warsong location.

I also really like the Spirit Woods. In Outland, you had the Spirit Fields. In Warlords of Draenor, the Spirit Woods are what surround Oshu’gun. You get to learn more about the forces that dwell there and what they’re doing—we explain that a bit as you’re taking care of business.

Kurt Sparkuhl: I think the two I like the most are Hallvalor and the Ring of Trials. Hallvalor—which became the ogre-inhabited Burning Blade Ruins in Outland—is super cool; we get to see more of the backstory of the Burning Blade clan, which we haven’t gotten to show before. We get to see how their clan operates and some of their traditions. There are some familiar faces—at least one in particular— that you’re going to get a lot of backstory on.

The great thing about the Ring of Trials is that players get to see it a bit earlier on in its existence and learn more about why it’s there and what its purpose is. It’s been built up as a sort of neutral hub, and players will be able to interact with all sorts of NPCs from all over Azeroth and Draenor—it’s pretty cool, but I don’t want to spoil too much.

Q. What outposts will players be able to build in Nagrand, and how do they impact the Garrison?

Eric Maloof: The Alliance and the Horde get the choice of two different buildings. You’ll get access to this decision early on, though your blueprints are waylaid by the Warsong at the start, so you’re going to need to recover those first. You’ll be able to build either a Corral or a Tankworks for your Garrison.

For the Corral, you’ll get either a Talbuk on the Alliance or Frostwolf on the Horde, which you can ride all the time while you’re in Nagrand—this is where mounted combat comes into play. If you build the Tankworks, the Alliance gets a Siege Engine and the Horde gets a Demolisher.

There’s plenty to see and explore in Nagrand—though we wouldn’t recommend idling too long on the road when the Warsong Outriders are making their rounds.

WoD Trailer: Wish You Were Here