🐙 @JJoNakLove. Zenyatta. Octopi. What a design!

It's truly worthy of our 2018 @TMobile League MVP.

You'll definitely want to add it to your collection, so start earning League Tokens by watching live #OWL2019 matches. The skin is available on June 27 for a limited time. pic.twitter.com/CBk5i0ie3M

Skin for a King

It started with a call in the offseason. On one end was Seong-Hyun “Jjonak” Bang, superstar support for the New York Excelsior, who had recently been named MVP of the inaugural Overwatch League season. On the other end were Arnold Tsang, assistant art director for Overwatch, and Marisa Palumbo, senior producer for Overwatch Esports.

The discussion didn’t center around concepts so much as Jjonak’s personal interests: his signature animal, the octopus; his favorite color, pink; his fashion sense. The call ended, Jjonak went back to his offseason, and that’s when the work began on the first-ever player-inspired skin since the start of Overwatch.

Months later, on a bright Saturday afternoon in Irvine, Jjonak and his NYXL teammates filed through the near-empty halls of the Overwatch department at Blizzard’s main campus. The 2018 Overwatch League MVP Jjonak Zen-Nakji Legendary skin was finally ready to be revealed.

And it was worth the wait, for the immediate torrent of excited syllables as Jjonak and friends finally laid eyes on the creation—a deep-sea take on the omnic hero, which fuses aquatic elements with classic NYXL branding, and the crowning features: an encased pink octopus where Zenyatta’s metal dome normally perches, and a wreath of those same octopi in orb form. 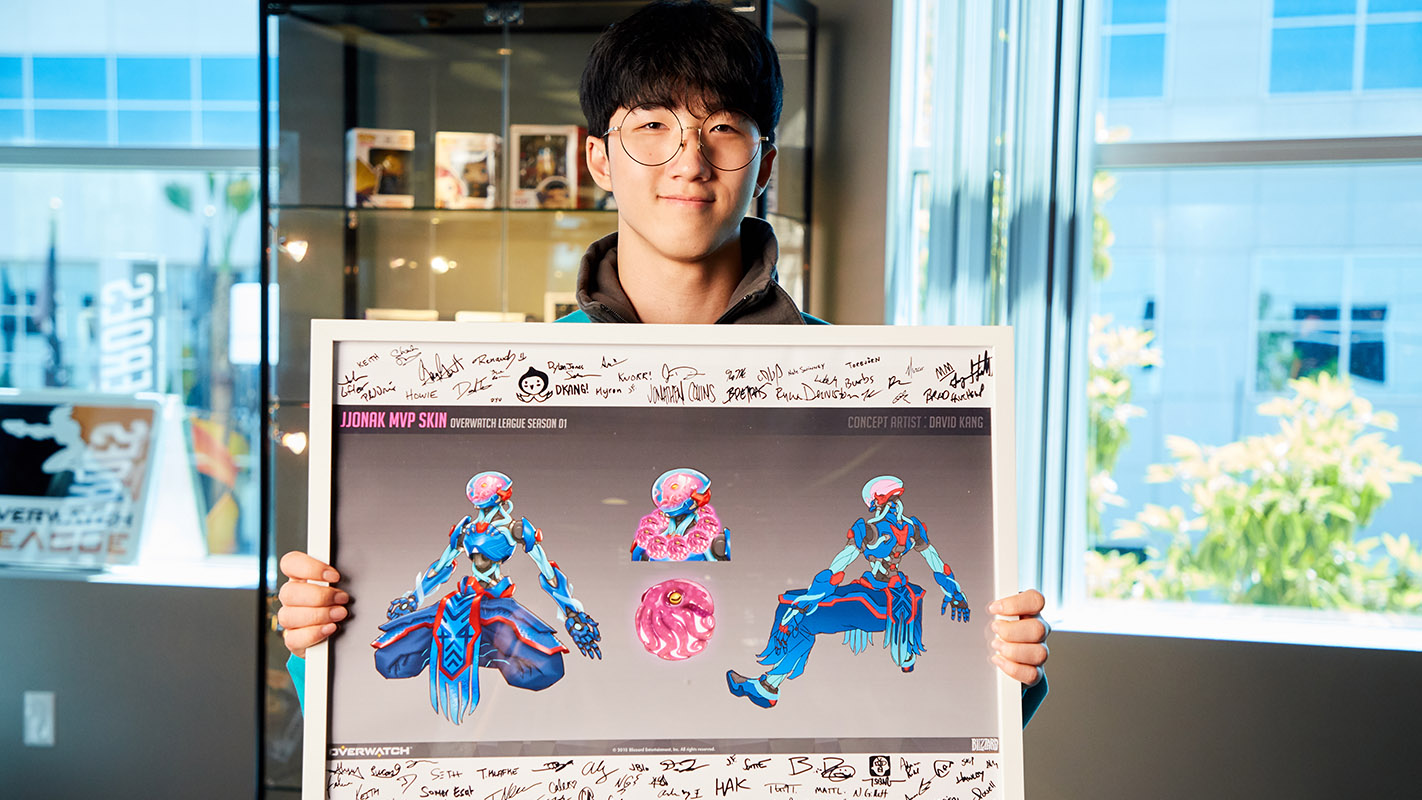 After the initial chorus of oohs and aahs, the players started picking out details. “New York is in the design,” noted team captain Jong-Ryeol “Saebyeolbe” Park. Then, several decibels louder, “THE ORBS ARE OCTOPI!”

The team acknowledged that octopi, with their slow-moving mystique and squirmy tentacles, aren’t universally appealing, but Jjonak insisted that the octopi design used in the skin was on the cuter side.

“It is cute, but at the end of the day, you’re gonna be in first person wearing the skin, so it’s going to be gross to whoever looks at you,” Pine joked.

Jjonak’s satisfaction was evident as he soaked in the numerous details he remembered discussing with Tsang during their call. Designing a skin like this isn’t easy, even before taking player customization into account. There were three developers on hand to help unveil the skin, but the framed concept art that they gifted Jjonak was crammed with dozens of signatures, a truer representation of how many people touched this project.

Dylan Jones, the lead character technical artist on Overwatch who worked closely on the Jjonak skin, summed up the basic challenge of creating skins: “You have to find a new design that works with existing animations.” For Zenyatta, he explained, shoulders are a tricky area because of the range of motion the hero is capable of, and there are limitations on what types of fabrics and textures can be incorporated, as well as where it can go.

The sci-fi octopus design was drawn by concept artist David Kang, who wanted it to have a different visual effect than the existing Cultist skin, which is a fan-favorite, and the tentacles gave the art team an opportunity to get creative. “The tentacles on his face are physical, so they will always move around when his head moves, but then they’re also kind of undulating constantly, so it’s a cool combination between physical and animation,” Jones pointed out.

Jjonak discovered another detail when he finally got to test out the skin in-game, exclaiming excitedly over the glowing tentacles that appear during Transcendence. The octopi remain his favorite detail, though—understandable, given how fundamental the creature is to his persona. “I like unusual, weird things and I think the design of the orb is really unique and cute,” he said.

The status of being the first player to ever have a skin designed expressly for him was not lost on Jjonak, who said he felt “hyped and proud” about adding another line to his entry in the history of Overwatch. It was not only a reminder of what he had accomplished, but also a bit of kindling added to his competitive fire.

“After I saw the skin, I felt that I wanted to be this season’s MVP again,” Jjonak admitted. “I guess it’s greedy to want two skins for both last season and this season, but I still want to be MVP again.” 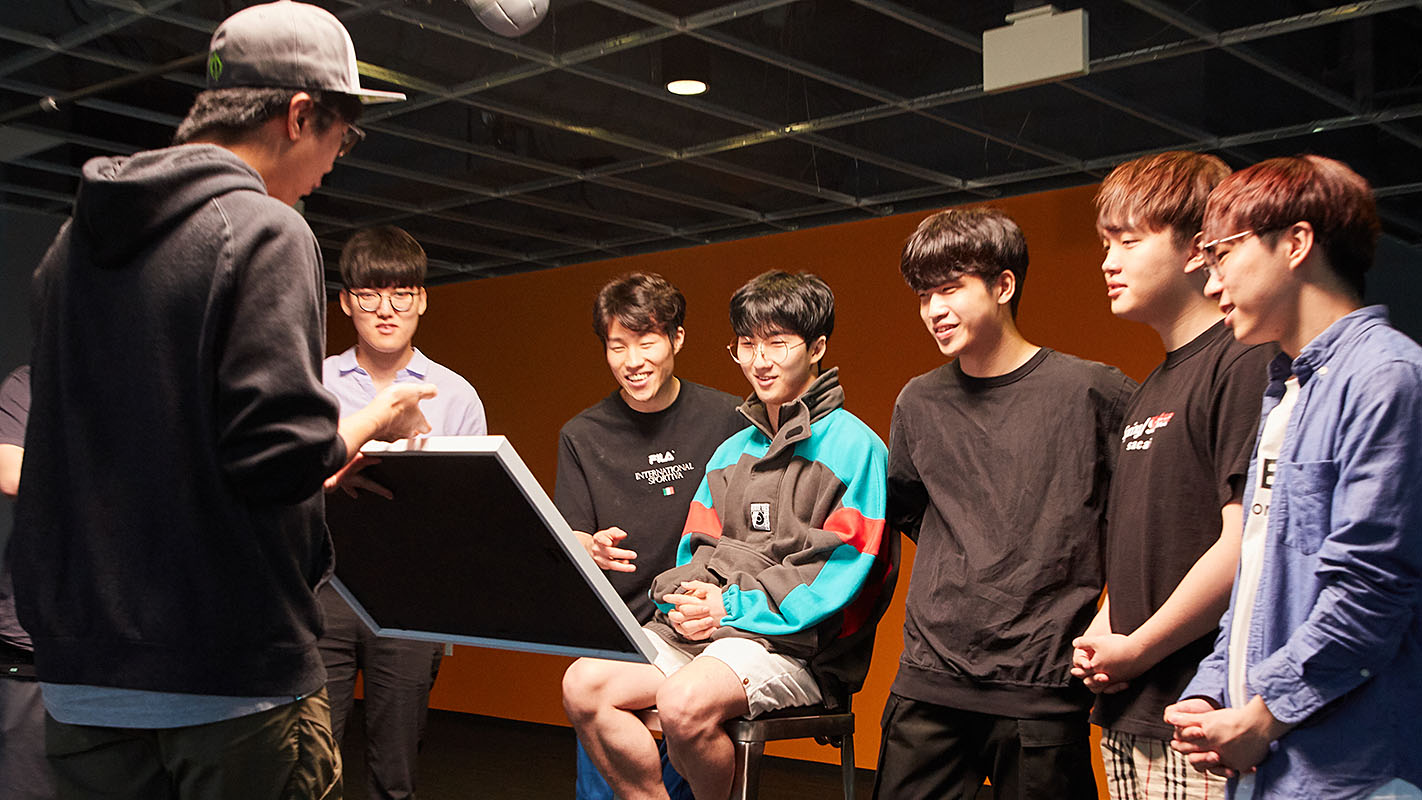 No doubt his teammates feel that extra bit of motivation too, judging by the wistfulness in Saebyeolbe’s voice when he said he wanted one for Tracer, too. Every other player in the Overwatch League should feel similarly once they see the skin. Getting a personalized skin for a signature hero is an immense honor, even for the reigning MVP, who became pensive in the final moments of the interview, fingers curled around the frame housing the concept art.

“I think this is something I’m going to talk about with pride for my entire life,” he said finally. “I think it’s an honor, and I’m going to be grateful for the rest of my life.”

As the team was getting ready to leave, Jjonak had one more question: “Is Profit getting a skin too?”

He was referring, of course, to London Spitfire DPS Jun-Young “Profit” Park, who was named MVP of the Grand Finals—the one performance-based accolade that escaped Jjonak’s grasp last year after New York was eliminated in the semifinals.

When the answer came—no, Profit would not be getting his own skin—Jjonak’s face lit up once more, and he bounced a little on the balls of his feet.