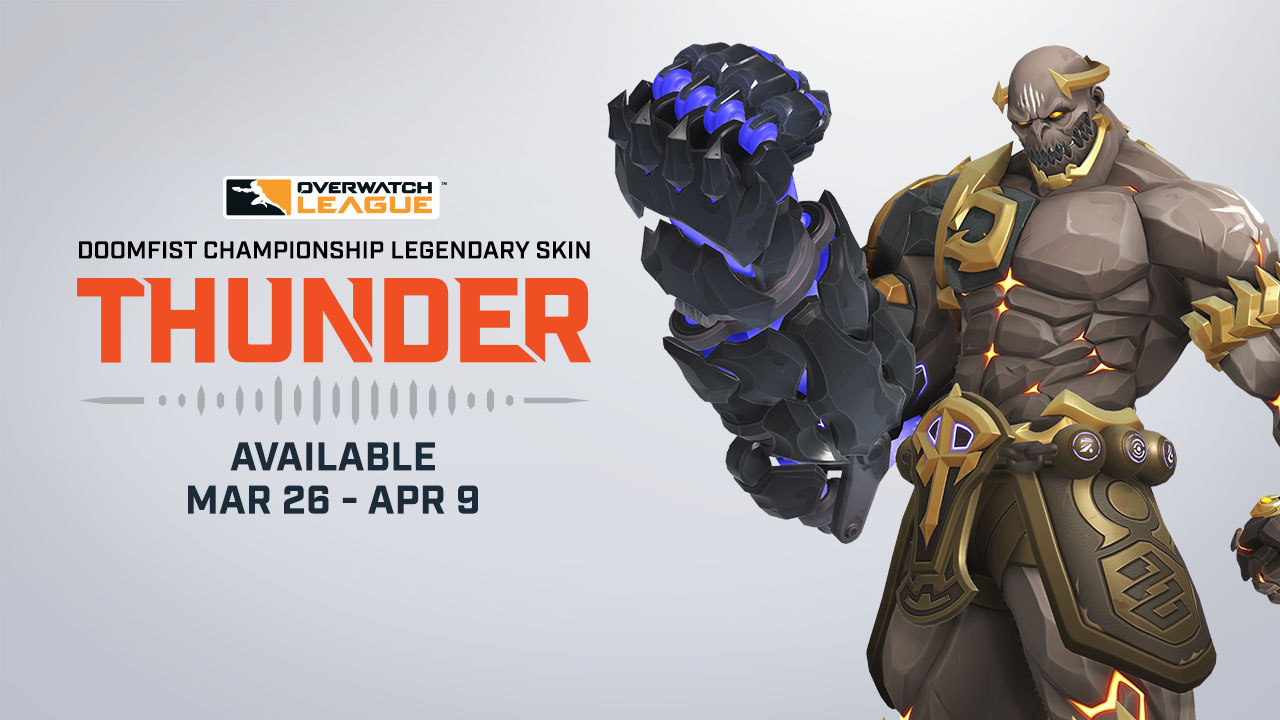 One day early last November, three members of the San Francisco Shock were herded backstage at BlizzCon, led through the entire length of the conference hall, and taken upstairs into a room overlooking one of the event stages.

The players—Grant “Moth” Espe, Jay “Sinatraa” Won, and Matthew “Super” DeLisi—all remember that walk, as well as the meeting that came after, clearly. After all, it’s hard to forget the first time you lay eyes on your very own championship skin.

“The biggest inspiration for this skin was to create some kind of supernatural, elemental being, with a theme of volcanic chaos,” senior concept artist David Kang described. “He’s molten lava inside a rock body, and we added a bit of championship feel with some gold and obsidian for his gauntlet.”

Those aspects of the skin’s design reflect the moodboard that Kang shared with the Shock early on in the design process.

“I kind of expected it would stand out pretty heavily, just because the inspirations were very eye-catching—a volcano exploding, Goku going Super Saiyan, all the stuff,” Super recalled.

Kang said that the players didn’t have too many requests for the skin, other than to make it as “badass” as possible, of course. The dev team was more than happy to deliver on that—but not before pulling a little prank. Before they unveiled the design for Thunder Doomfist to the Team USA trio at BlizzCon, Kang pulled out a badly Photoshopped Orisa skin mockup. (Sinatraa, laughing: “I was about to cry.”)

Ultimately, the three players were thrilled about the level of detail in the concept art.

“I thought it was going to be a pencil sketch or something, but it was basically finished,” Super recalled. “I think it’s a top-three skin in the game, probably. It’s crazy.”

Between the SF lettering on Doomfist’s belt, the shockwave logo painted on his forehead, and a similarly rendered star on his arm to commemorate the championship, this Doomfist is subtly—but unmistakably a Shock skin.

“The detailing for the San Francisco stuff was really cool,” Moth said. “The way they incorporated all the elements of the Shock was really subtle, really well-done.”

Sinatraa was drawn to one of the most unique elements of the design. “His face was like a demon, like we’re the villains of the league or something. I’m sure everybody in the league wants to beat us at this point, so I relate to it that way.”

Lead character technical artist Dylan Jones explained the challenges of making this particular face work. “We have a very standardized face across the characters, so all of [the skins] are typically going to have roughly the same face,” he said. “With this Doomfist, we wanted to do something a little special where we changed the face entirely. His lips don’t move—instead, he’s got this large array of teeth—but we still wanted his eyes to move.”

One thing the players haven’t gotten to see yet is how the skin looks and behaves in-game. And that’s where the Overwatch game team added one more treat: Thunder Doomfist’s Seismic Slam smashes a “SF” emblem—similar to the design on the waist— into the ground upon impact, and there are more lightning effects embedded in the cracks.

“That’s typically not something we do for every skin, but for a skin this special, yes, we decided to do something very special for the effects,” Jones said.

It’s a special skin befitting a special team, as the players who got a sneak peek at BlizzCon would attest. Super said the walk backstage felt “like an odyssey,” but it was nothing compared to the Shock’s journey through the 2019 season, all the way to Philadelphia, where they became the second team to hoist the Overwatch League trophy.

“It’s amazing—it’s just another way we’re leaving our mark on the game,” Moth said. “We worked so hard all season to get to the top, and being able to remember that forever with a skin that’s always going to be in the game is awesome.”

“When I started playing Overwatch I never thought I’d be on a team that had their own skin,” Sinatraa added. “It’s everyone’s dream to win the championship, so I’m just glad we did it, and we’ll probably do it again—knock on wood.”

The Thunder Doomfist skin will be available from March 26 to April 9 and will cost 200 League Tokens.