The History of Mercy: From Guardian to Guardian Angel

As Overwatch players around the world take on Mercy’s Recall Challenge, there’s no time like the present to look back at Dr. Ziegler’s past and explore how this iconic hero became who she is today.

Years ago, when we were exploring ideas for what would eventually become Overwatch, one of the areas the development team had been focusing on was the concept of a class-based online shooter—an idea that stemmed from an unannounced game that had shuttered, codenamed Titan.

„We had a class meeting, where [lead hero designer of Overwatch] Geoff Goodman said something that just really. . .stuck with me,” game director Jeff Kaplan recalled during a 2017 BlizzCon panel. “‘I wish,’ he said, ‘instead of doing a game with six, or maybe nine classes, we could do a game with 50 classes. But I wish each of the classes was very focused, and had a certain set of abilities, and they could all be wildly different from one another.’”

The idea soon blossomed into a first-person shooter where the characters were more than just their classes; they would have backstories and names, identities inextricably tied to the rich world they inhabited. They would be heroes.

As the team revisited concepts from their past work, they drew inspiration from an early iteration of a healer class that had been called the Guardian. In Overwatch, this healer would ultimately become Mercy, a bastion of angelic serenity—but before she could complete her transformation, she first needed to become Angela Ziegler. She needed a story.

The horrors of war have hounded Angela Ziegler since childhood. When she was just a young girl, her mother and father met their end when an air strike decimated the local Swiss hospital they had been volunteering at in the wake of the Omnic Crisis. Despite this tragedy, Angela was consumed not by a thirst for revenge, but by a desire to aid the imperiled and advocate for peace.

Angela continued her parents’ legacy by pursuing a career in medicine. She earned a reputation as a young medical prodigy, went on to earn both her PhD and MD, and became head of surgery at a prominent Zurich hospital. Her research into applied nanobiology led to a scientific breakthrough that revolutionized medical care by healing wounds at a vastly accelerated rate and attracted the attention of Overwatch. Brought on board by the organization’s idealistic leader, Jack Morrison, Angela took up tenure as head medical researcher.

Despite Morrison’s word that her research would not be misused, Angela sometimes found herself at odds with the commander, and felt the technology she developed was being exploited and weaponized for war.

Despite her reservations, Angela continued her work for the common good, ultimately engineering the Valkyrie swift-response suit. Equipped with a scanning visor, propulsion system, and biotic charges, the suit allowed her to soar over the battlefield and quickly respond to medical crises on the frontlines. Angela went on to pilot this suit in a number of Overwatch strike team missions, notably during the King’s Row Uprising and in pursuit of the Talon agent Maximilien in Havana.

After the fall of Overwatch, Angela cast off the role of Mercy and reassumed her civilian identity as Dr. Ziegler, treating the downtrodden and dispossessed in different countries. Her guilt over the worldwide suffering caused by Overwatch led her to Egypt, where she aided the wounded despite their scorn for her and all that her former comrades had done to their country. There, as told in Michael Chu’s short story “Valkyrie,” the reappearance of familiar faces dredged up memories, and a threat forced her to take wing. Now she needed to make a choice—would she remain Dr.  Ziegler, or would she answer Winston’s recall and once more don the mantle of Mercy?

From Guardian to Guardian Angel

As dramatic as Mercy’s backstory is, her design history has its own twists and turns.

Several of Overwatch’s most recognizable heroes came from earlier class-based concepts—notably Tracer’s predecessor, the Jumper; the Assassin that served as Genji’s prototype; Reaper, whose design and kit remained relatively constant from concept to realization; and the Guardian class that served as the basis for Mercy. The Guardian’s skills bore similarities to what Mercy’s are today, with abilities named Salvation and Resurrect making up the core of its kit, along with a Heal Beam and a weapon called the Stinger. 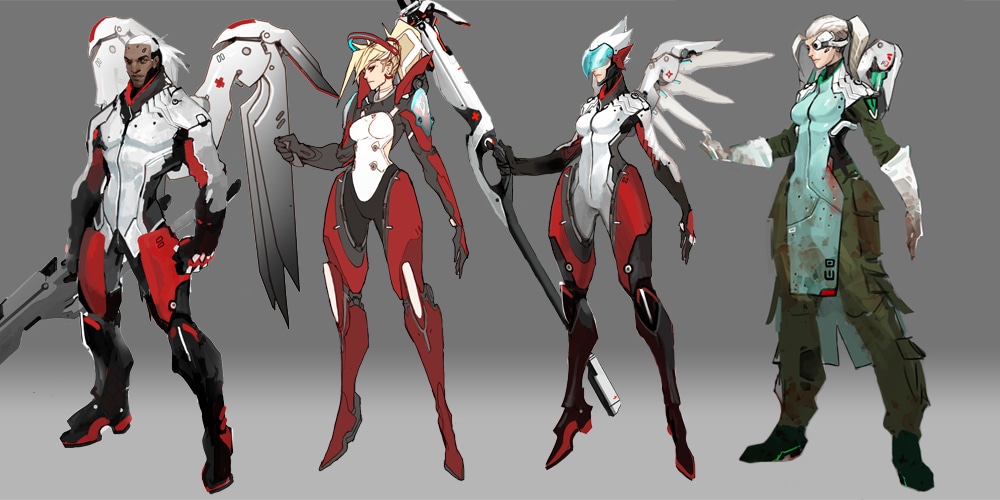 Though Overwatch’s Guardian Angel now sports gilded accents and a sleek, techno-seraph silhouette befitting of her benevolent moniker, her early look featured a few differences that were ultimately changed in her final design: a much larger staff, a red halo, and striking crimson cuisses. Her name, too, changed during the development of Overwatch; while she was pitched as Angelica, a hero whose kit included a Heal Beam, Teleport, and Resurrect, she later took on the name that had originally been Pharah’s—Mercy.

Now that you’ve learned more about the history of Angela Ziegler, you can fly into the fray as Mercy and earn her Dr. Ziegler skin in Mercy’s Recall Challenge. Through December 2, earn unique rewards by winning games and watching Overwatch on Twitch. Doctor’s orders!