September is here, and summertime is coming to an end. This month is chock-full of festivities, celebrations, and heated PvP action as we draw closer to BlizzCon 2015. Here’s a peek at some of the fun you can have!

The wondrous and mystical Darkmoon Faire returns to Azeroth on September 6, and if you haven’t completed all of Silas Darkmoon’s new Darkmoon Races, now’s the time! Test your speed and agility on a variety of racing mounts as you dodge electrifying obstacles and zip all over Darkmoon Island for rewards and achievements. You may also want to take a few moments to be a kid again by going for a ride on the new Darkmoon Seesaw.

Every year on this one day, Captain DeMeza lands at the goblin town of Booty Bay in Stranglethorn Vale, attempting to recruit land-lubbers into her buccaneer ranks. Don’t miss your chance to visit her or her henchmen in the capital cities. New for this year is the Big Bag of Booty. Be the Robin Hood of pirates by purchasing this one-time-use item which you can toss into the streets to help distribute piles of gold to those most in need. Yarr!

Celebrated by both the Horde and the Alliance,  Brewfest is a time to enjoy the fermented fruits of the harvest: pretzels, cheese, and brew! The competing breweries Thunderbrew, Barleybrew, and the Ogres, all come together outside of all the major cities in a bid to outdo each other with their special ales, meads, and beers. Brave adventurers are invited to sit back, take a pull, and sample the finest wares these brewers have to offer!

Brewfest is your only chance to acquire the Swift Brewfest Ram and Great Brewfest Kodo mounts, as well as the Wopertinger and Pin-Sized Pink Pachyderm pets. It’s also your chance to get your brew-covered mitts on a few new items: the Stout Alemental pet, and the Steamworks Sausage Grill and Brewfest Banner toys!

The Harvest Festival is a time to commemorate those who have sacrificed their lives to help their allies. Throughout history, many have given their lives to that end. Every year, members of the Horde and the Alliance set aside time to honor the memories of the fallen, and to pay tribute to those whose memories are held most dear: Uther Lightbringer, for the Alliance, and Grommash Hellscream, for the Horde. 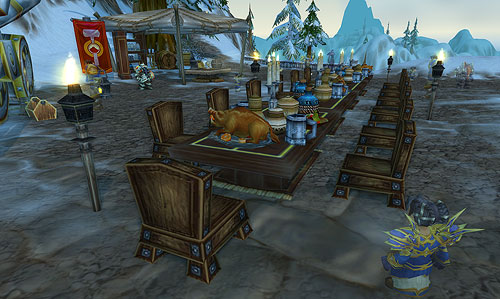 But your determination to pay respects to the dearly departed doesn’t stop there! Show your patriotism by earning a new Spiritshard which will transforms you into an Anxious, Vengeful, Forlorn, or Peaceful spirit. It’ll be your chance to truly feel the emotions of those who have paid the ultimate price.

BlizzCon is only a couple of months away and teams are vying for a chance to make it to the finals. Don’t miss the WoW North American Regionals on the official World of Warcraft Twitch channel! We’ll be sharing more details on the event in the coming days.

You can catch all of the action on the GCDTV Twitch channel, sign up to play on their Battlefy site, catch-up on previous tournament VoDs here, and follow their official GCDTV Twitter feed to stay up-to-date on all of the action.

The Electronic Sports League continues to bring the weekend WoW action on:

For more information, head over to the ESL news site, and don’t forget to follow ESL on Twitch and Twitter.