In World of Warcraft Patch 6.2, we introduced a new series of seven different weekend Bonus Events, two of which feature Timewalking Dungeons—one in Outland dungeons for characters level 71 and higher, and another in Northrend dungeons for level 81 and higher. When you Timewalk these dungeons, your character’s power and gear will be scaled down to a fraction of what they normally are, and as you may have never ventured into some (or any) of these dangerous places, it might be a good idea to prepare yourself now.

In order to reestablish his dominance over magic, the blue Dragon Aspect, Malygos, has launched a ruthless campaign to sever the link between mortals and the arcane energies coursing through Azeroth. To this end, his blue dragonflight is redirecting the ley lines of the world to the Nexus, Malygos‘ towering lair.

In response to the blue dragons‘ offensive, the Kirin Tor, the elite magi of Dalaran, have allied themselves with the red dragonflight, who are charged with the preservation of life. Their combined forces are subverting the blue Aspect’s offensive, but time is running out. The only question that remains now is… can Malygos be stopped before his crusade reaches its cataclysmic finale? 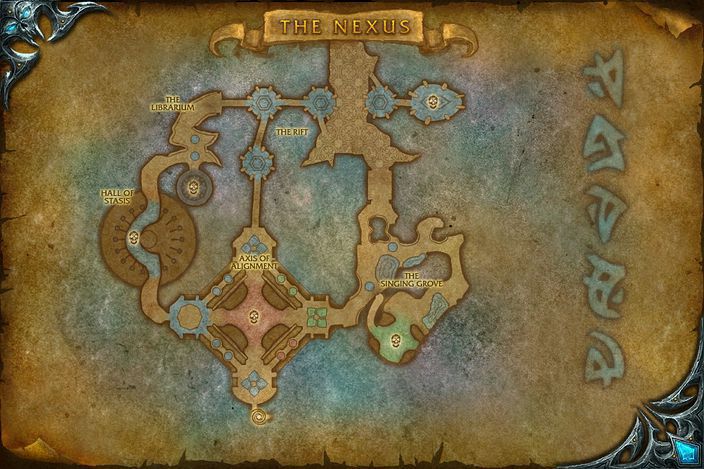 Commander Stoutbeard led his troops against some of the most dangerous enemies of the Alliance. The Halls of Stasis may have slowed him down, but the sight of Horde adventurers will get him up and running again.

Commander Kolurg sought dangerous treasures to add to the Horde armories. His anger at his misfortune in the Halls of Stasis will not be eased when he thaws to find Alliance adventurers stealing his thunder.

It is rumored the Grand Magus Telestra tutored Prince Kael’thas. Though she believed the Prince allying with the naga was foolish, she could not support Dalaran imprisoning her people. Malygos only needed to remind her of this betrayal to gain her as an instructor for his mage hunters.

Directing so much of Azeroth’s arcane energy through the Nexus has created tears in reality. As Malygos’s forces try to drive back invading creatures, the chaotic arcane power has taken form as Anomalus. If the creature is not stopped, it will unmake everything it can touch.

The incredible arcane energies of the Nexus have transformed the Singing Gardens and its guardians. Ormorok’s simple mind has become obsessed with the energies transforming him. For those who would interrupt his contemplations he has few words, but a mountain of violence.

Whether the tortures inflicted on Keristrasza were revenge for the death of Saragosa or a misguided attempt to turn her into an ally is known only to Malygos. Regardless of his intent, her allies have heard her cries of anguish and disturbing whispers of her diminishing mind.

If you haven’t earned these achievements already, completing this dungeon will award Heroic: The Nexus and The Nexus .

If your group is superb and wants to go for it, you can also earn:

Get in there and Fight!

What’s your main goal in Northrend Timewalking dungeons? Transmog? Achievements? Will it be your first time in The Nexus? Let us know in the comments below.