We just released a new patch for Heroes of the Storm, which brings a new Event, Battleground, and Hero to the Nexus, as well as UI improvements, balance changes, and more! Check out today’s patch notes below.

NOTE: Orange text indicates an addition that was made between the Public Test Realm and final versions of the patch notes. 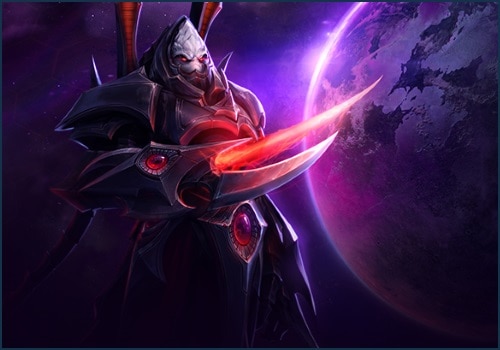 Xel’naga artifacts have begun to appear all across the Nexus, and SCVs are being deployed to collect them. Terminate these interlopers with extreme prejudice and collect artifact pieces to earn some sweet new rewards!

Free Hero for All!

After downloading today’s patch and logging into Heroes of the Storm, all players will be able to add a new Hero to their collections for free!

Not all heroes are born of altruism. . . some, like Alarak, simply desire vengeance. As the new Highlord of the Tal’darim, Alarak leads his people to a destiny free of the corrupt influence of the fallen Xel’naga, Amon.

The Dominion used the remote and hostile planet Braxis to conduct experiments on ways to turn the Zerg swarm into a weapon they could unleash on their enemies. Though the Dominion’s main psi disrupter was destroyed, this space platform’s beacons remain fully operational and ready to be used. Capture the beacons and watch what happens when a flood of weaponized Zerg ravages the battlefield.

* This item is exclusive to the Machines of War Bundle until it is officially released at a later date. Click here to view a full release schedule for Machines of War items.

** The Obsidian Cyberwolf Mount is exclusive to the Machines of War Bundle, but may return to the Nexus at a later date.

Developer Comments:  We started playtesting with staggered Mercenary Camp spawn times, and quickly began to realize that it added more strategic depth to the game, and coincided with some of our Battleground events. We have been happy with the changes overall, and are listening to any feedback you may have!

Battlefield of Eternity and Infernal Shrines

Developer Comments:  We did not like the power of the Attack Speed slow for Imposing Presence given how little counter-play there is. We’ve decided to move some power out of the passive portion of the Talent and give it a new activated effect in order to create some bigger moments for players who choose to take it.

Developer Comments:  In our ongoing pursuit to create meaningful and Hero-specific generic Talent choices, Bribe was a Talent that got caught in our crosshairs this patch. We have removed it from a few Heroes and have added new flavorful versions to a few others. We have always liked the design and gameplay behind the Talent, but also realize how much players had to give up in order to pick them. Wingman, Pixie Charm, and Covert Mission are being reintroduced to Falstad, Brightwing, and Nova, respectively, with design mechanics more suited to each Hero’s unique style of play.

Developer Comments: We’re removing the majority of our old Relentless-like Talents from the game, because we found that it wasn’t clear to the enemy team what was happening. Reducing the duration on very short disabling effects to begin with was hard to notice, and typically felt like a bug when it did happen. In some cases, we’re replacing these Talents with Hero specific ones that more clearly convey what’s happening, while fitting the gameplay of the Hero.

Developer Comments:  We’ve redefined The Butcher to have a more unique role as a powerful late-game hero who feeds on the flesh of his victims via his Fresh Meat Trait. His early game is weaker than before, but if he can complete his quest he will become an incredibly potent force that the enemy team must answer. We had a ton of fun testing him, and hope you all enjoy the new Butcher!

Developer Comments:  We realize this rework may come as a bit of a surprise to our community, especially since Valla’s Talent diversity has always been pretty good. The roots of the redesign have been floating around the design bullpen for 6+ months, and after some initial testing we felt like we had to pull the trigger and get it out to you.

Similar to Zagara and our other large reworks, we didn’t want to change the ‘feel’ of the Hero —Valla users should still feel completely at home while playing her. Our main goal was to increase the potential for amazing Valla players to differentiate themselves from the mediocre ones and aimed the majority of these changes toward lifting her skill-ceiling. We believe that players will still be able to build Valla very similarly to the ways they have in the past, but with more interesting and potentially powerful payoffs. We are excited to bring the new Valla to our community and look forward to hearing what you all think!

Developer Comments:  We have been looking for ways to add gameplay to our Supports, and believe that Lt. Morales’s Displacement Grenade is a place where we could give her more control. We’re hoping that this gives players an opportunity to make bigger plays by having more control of where they want the enemy hero to move with the Grenade’s knockback

Developer Comments:  When looking at Burrow Charge, we liked that this Ability provided an immense amount of mobility and allowed Anub’arak to dive the back line, but we didn’t like that he had an Invulnerability on a 16 second CD. Essentially, Anub’arak could hold this to completely nullify a Pyroblast or any huge damage source, which is not intended. By changing this to Unstoppable, we still allow Anub’arak to be very slippery and get out of bad situations quickly.

Developer Comments:  As our heroes develop over time, we often find niches for their roles that are only available via Talents. While we love that our Talents augment our Heroes in interesting ways, we are wary when a Hero is picked specifically for a role that they are given via a Talent. We did a pass on our current roster and found a couple of these cases in Johanna and Muradin. We like how Johanna is seen as a warrior with good wave clear, and how Muradin is seen as an anti- auto-attacker. We’ve decided to make these features part of their base kits, and will be keeping an eye on others in the future.