Q: Murlocs are very well known in the Warcraft universe. They identify as weak, but persistent. Did the team feel like they hit the expectations for a Murloc with Murky’s design?

A: Hi, thanks for inviting me! So, part of what makes developing Heroes so much fun is getting to ask questions like, „If I were a Murloc, what would I expect I’d be able to do?“

Let’s just pause, and think about how ridiculous that statement sounds.

Okay, as for Murky, what would you expect to happen? Well, if you expected to be a persistent, annoying force that just dies a lot, then yeah, I would say we’ve hit that target. You are the annoying fish-man that just keeps going and going! You’ll run up to your opponents and cover them in stinky slime for a long period of time, slowing them just enough to irritate them. And you’ll demoralize the enemy ranks.

Q Murlocs are weak and they die a lot (it’s part of their nature), and Murky is no exception.  By placing an egg, Murky can respawn relatively quickly. So long as his egg stays alive, Murky’s death timer is essentially nullified, which allows him to persistently work toward his goals. How did the design team come up with such an interesting concept, and how is the team making sure to keep it balanced?

A: Credit for the core idea does belong to Dustin Browder. We had been spinning our wheels for a while trying to come up with a cool hook for Murky when Dustin suggested we try the „cartoon character“ Murloc, for whom death doesn’t mean anything. From there, we jammed on how that could possibly work in our game:

What kind of timer would there be on your death?

What kind of XP would be granted by killing him?

Where would you respawn?

Is the respawn location pre-determined or on-the-spot?

We decided the most straightforward approach would be for the Murky player to pick the respawn spot. We wanted to offer the most freedom for our players, and after talking with the art team, they gave us the idea of a Murloc Egg or Nest that Murky could respawn from. From there, it was just a lot of playtesting and reworking the numbers to get the egg to feel exciting and fun. As for keeping his deaths balanced, that is a number we’ve been tuning through our internal playtests, and we’ll be keeping an eye on what happens after he is set free to run amok in the Nexus!

Q: What are some of the strategies players can pull off with Murky? How can teammates help Murky be successful?

The first strategy relies on watching the minimap a lot, and plays similar to a Gazlowe. This Murky is constantly waiting for the opposing team to be distracted, and sets to work laying his Pufferfishes down and sliming the enemy towers and minions. A Murky left entirely unchecked can wreak havoc on opposing structures.

The second strategy is a bit more direct, and involves good usage of his Safety Bubble (E) ability. This Murky likes to apply his slime to as many opponents as possible, get their attention, and pop the bubble at just the right time to induce even more chaos! Every second the enemy team spends thinking about you is a second earned for your team. So who cares if you die? Your egg is nearby and you’ll be back in the action within seconds. This style of Murky play feels so good when the enemy team decides to blow a Heroic Ability to finish you off. „Oh, I’m worth a Triple Tap? Oh, okay! I’ll take that trade!“

Q: What about opponents? How should they deal with Murky?

A: Murky is the annoying little cockroach that you should step on, provided it’s not out of your way. Enemies shouldn’t devote too much time to „egg hunting“, but rather squish the little Murloc only if it doesn’t hinder them too much from their main goal. Nova players should throw a snipe at Murky if they think they can hit him, as it will often times finish him off given his limited health pool. During the team fight, he really should be brushed aside and left alone. His damage potential is only to be feared if he has the Wrath of Cod talent, and even then, opponents only have to look out for Pufferfishes that are about to pop. Murky is annoying. He will slow your entire team down, so killing him isn’t bad, it’s just not worth your big cooldown abilities (usually).

Q: Can’t wait to play him! Well Kent, thanks for joining us. We have a tradition here of trying to end our Designer Insights with a fun anecdote. Do you have any interesting stories that occurred during the early stages of Murky testing?

A: One of the core ideas of Murky’s second heroic ability, Octo-Grab, was that Murky would lock an enemy hero down for 3 seconds, but then proceed to only do 1 damage a second as he slapped you. When he achieves level 20, there is a talent that gives the ability some real damage. Well, this meant we could have fun with the tooltip! At first, we had it say, „Increases the damage of this ability to do 300 damage a second.“  While it’s accurate, it’s not as fun as it could be, but one of our balance designers had the idea of expressing it as a percentage change. So thus, the best tooltip in the game was born, now stating, „Increases the damage of this ability by 30,000%.“ Oh Murky! 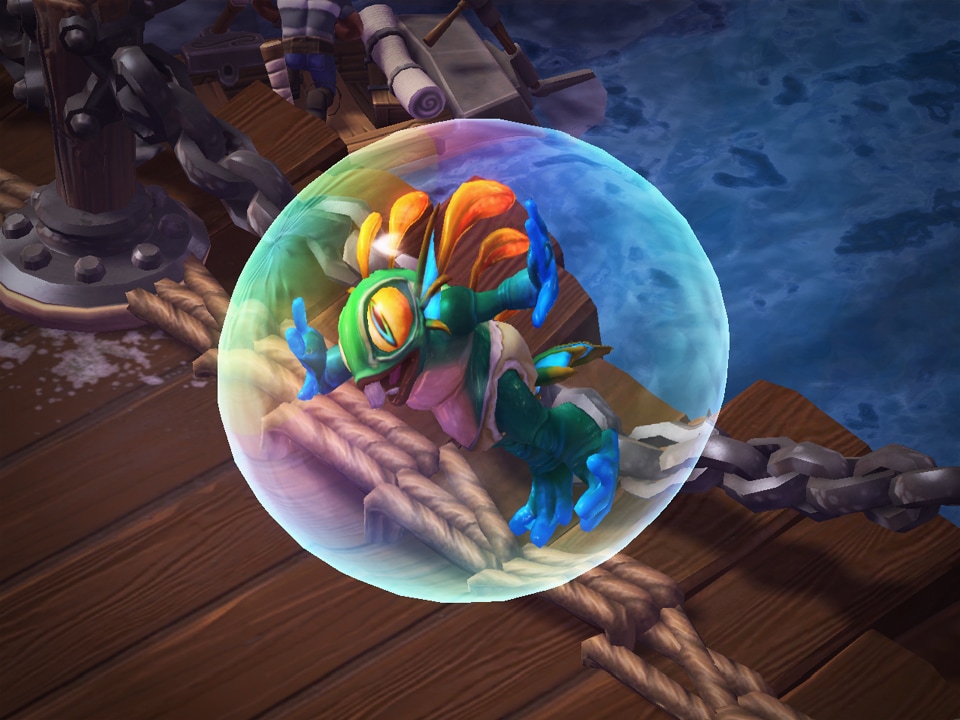