Watch live video from Heroes of the Storm on www.twitch.tv 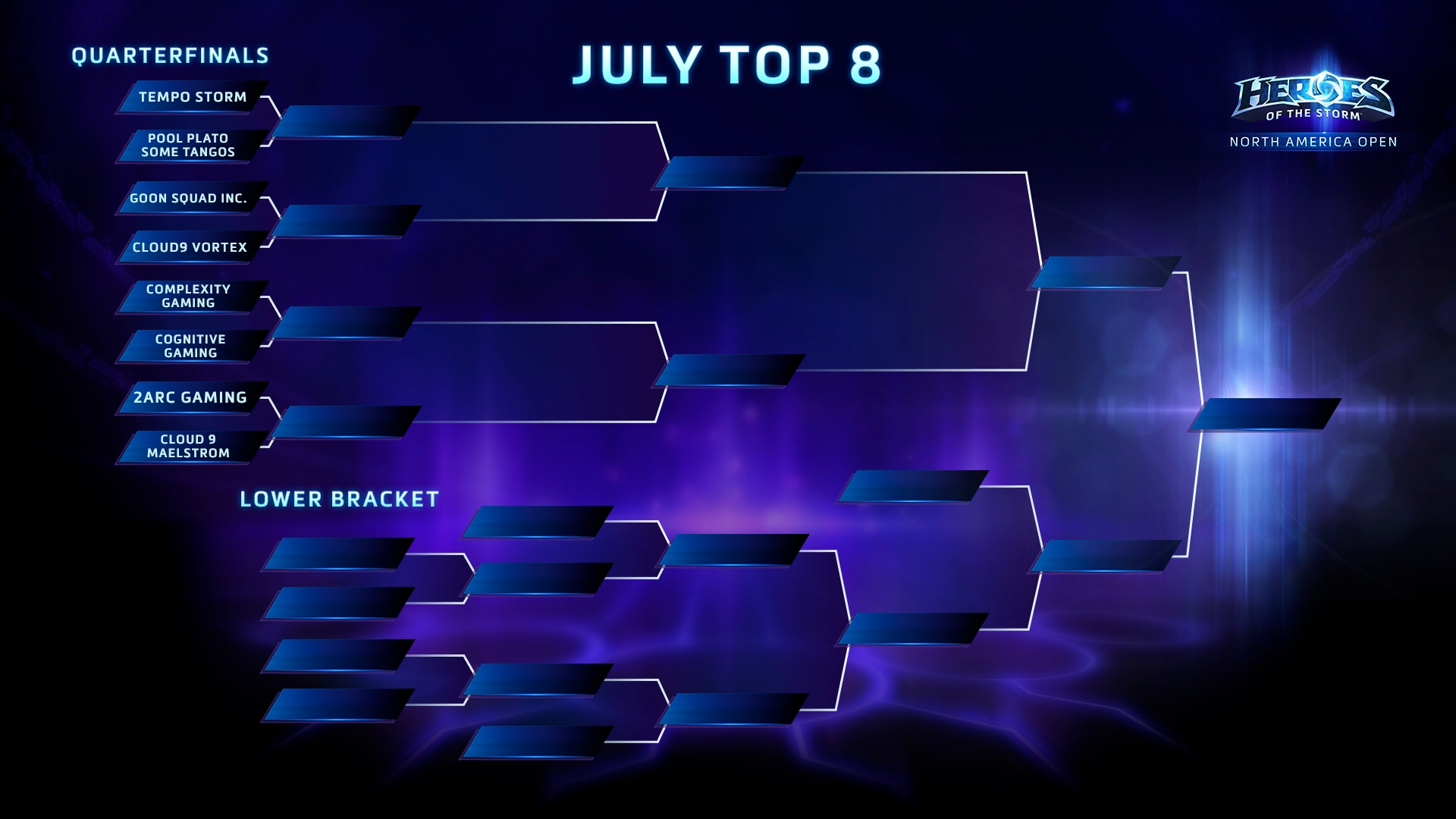 What are the secrets to Tempo Storm’s success? Sound fundamental play, ruthless discipline, and an unparalleled ability to punish the smallest of mistakes. This is not a team whose success is built on gimmicks and cheese. Tempo Storm is the Ivan Drago of competitive Heroes of the Storm: a well-oiled, relentless machine that simply breaks its opponents.

In the opposite corner stands Pool Plato Some Tangos, which features KingPlato and Apauloh from the standout Boston College Heroes of the Dorm team. Pool Plato arguably had the toughest road to the Round of 8, having to navigate a murderer’s row of some of the most promising up-and-coming teams. Following a first round bye, Pool Plato ran into some of the better competition in the tournament with a second round match against Fan HotS on YouTube. This tough series went the distance, with Pool Plato’s superior rotational play carrying the day on Sky Temple and Tomb of the Spider Queen. Of particular note was Pool Plato’s usage of the powerful Zeratul+Abathur combo on Sky Temple. Next up for PPST was Ascent. After falling behind 0-1, Pool Plato rallied, busting out the Zeratul+Abathur combo once again on Sky Temple and dominating with strong rotational play on their way to the match victory. Against Kappa Wolves, Pool Plato found success on—you guessed it—Sky Temple, with very strong poke composition play.

Don’t be surprised if Tempo Storm doesn’t drop a single game in this matchup. They are that good. For Pool Plato, the goal is to establish themselves as a top North American team. A top four finish would be great, but even that path may be difficult given that Tempo Storm is likely to give PPST an express ticket to the lower bracket.

A newcomer to the North American Open series, Goon Squad, Inc. has stormed onto the scene with a run straight to the Round of 8. Highlighting their performance was an impressive 2-0 series victory over June Open quarterfinalists, The Pleyz. Goon Squad’s BOSSFLOSS played an absolutely terrifying Muradin in each game, wreaking havoc in the Pleyz’s back line and salvaging some questionable engagements for his team. It will be fun to see how the Goons stack up against stiffer competition in the double elimination rounds.

Their first test will be a tough one as they square off against the venerable Cloud 9 Vortex. Functionally, C9V has been a kind of farm team for its big brother, Cloud 9 Maelstrom. Three of the current C9M players were once on C9V. The most recent departure from Cloud 9 Vortex to Cloud 9 Maelstrom is Fan, who was replaced on C9V by Kenma. Still, don’t let the team’s second-class status fool you. C9V is a strong team that not only routinely finishes in the top four in major tournaments, but has also been known to take a match off of Maelstrom every now and then in their ongoing sibling rivalry. C9V cut through lesser competition in the qualifying rounds like a hot knife through butter. Even without Fan, this is a team that is ready to play.

Making it to the Round of 8 is quite an accomplishment for the Goons, but they may not have a chance to get comfortable at the July Open. C9V has the firepower to make short work of them, and the Goon Squad’s first losers bracket matchup likely won’t be much easier. Such is the talent level of the North American Open series. C9V, on the other hand, is well-positioned for a deep run. It remains to be seen whether they can repeat or better their 4th place performance at the June open without Fan.

Perhaps no team has had more disappointing results than compLexity. Back when they were known as Barrel Boys during the late alpha and early beta stages of Heroes of the Storm development, this team seemed poised for greatness. They were aggressive and creative, pushing Tempo Storm and Cloud 9 Maelstrom for a spot among the elite North American teams. Unfortunately, the thrill surrounding this team seemed to evaporate as soon as they were sponsored by compLexity Gaming, and the team has yet to regain its mojo. One wonders if compLexity is back where it needs to be. After cruising through the initial qualifying rounds, compLexity was guilty of some very sloppy play and was badly outmaneuvered by Dark Arts in Game 2 of their Round of 16 clash. This was followed by another sloppy compLexity performance in  Game 3. Though compLexity ultimately won the series, their overall play against Dark Arts, newcomers to the competitive scene, was not representative of a team aspiring to be among the elite.

While compLexity is a team in competitive limbo, COG is a team that may be on the upswing. In June, COG substantially beefed up its roster by adding iakona and, more importantly, Glaurung, formerly of Tempo Storm. COG mowed through Moist Brotato and BHOSS, Inc. en route to a titanic sweet 16 match against Zeveron. COG immediately put Glaurung to good use in Game 1 on Cursed Hollow, building a team around Glaurung’s Butcher that included Muradin and Tyrande. Those two, along with Glaurung’s Butcher, formed a terrifying 3-man gank squad that put tremendous pressure on Zeveron during the laning phase. COG opened a lead that they never relinquished. Keep an eye out for that same COG build again in the Round of 8.

This should be one of the more interesting matchups in the July Open. On the one hand, compLexity is a team that is full of unrealized potential and they know this better than anyone. On the other, COG has tasted a little success and seems ready to take the next step. After being ousted by Cloud 9 Maelstrom in last month’s open, COG has an opportunity to go deep in this tournament. They certainly have the horsepower to overcome a team like compLexity. It’ll just be a matter of executing.

After getting snuffed out by Tempo Storm in the Round of 16 last month, the most innovative team in the North American scene will be making its debut in the Round of 8 this month. 2ARC has established a reputation for thinking outside of the box strategically, pioneering unique team compositions like their no-Warrior strategy. However, these compositions got 2ARC into some trouble during their Round of 32 series against upstart Banana Cabana. In Game 2 on Battlefield of Eternity, 2ARC curiously opted for a no-warrior comp utilizing Kerrigan and Illidan as the front line, backing them up with Uther, Tassadar, and Falstad. The risk with this composition is that Battlefield of Eternity, with its cluttered central area, is a map where ranged damage is king. Eventually, the superior damaged output  of Banana Cabana’s Kael’thas, Valla, Tyrande, and Malfurion took control of the game. Nonetheless, 2ARC rebounded well enough to take the final game against Banana Cabana and their subsequent series against Team Blaze.

Cloud9 Maelstrom is another team in flux. Though they’re undisputedly a top team in the region, C9M has played second fiddle to Tempo Storm for all of 2015. In an effort to shake things up and spur some better performance, Maelstrom replaced Biceps with Fan from Cloud9 Vortex. The change has not yet had the intended effect, as Tempo Storm has continued its dominance in recent matches. Still, C9M is a very strong team and one of the favorites to win the North American July Open. C9M had a particularly strong showing against Stellar Lotus, handling them convincingly in the Round of 32 before running into some resistance in the Round of 16 against a surprisingly frisky Haec Nuces. It wasn’t until Kael’thas got access to his level 16 Ignite talent that C9M was able to firmly take control of Game 1. Tested but unbowed, C9M never looked back on its way to a 2-0 series victory.

2ARC has emerged as one of the better teams in North America, but has yet to firmly establish itself as one of the unqualified best. The next step for them is to show that they belong in the conversation with Tempo Storm and C9M. For C9M, the only mountain left to climb is to defeat Tempo Storm on the way to victory in a major tournament. With that as their goal, C9M will be looking to take care of business and quickly dispatch 2ARC before moving on towards a seemingly predestined match against Tempo Storm in the finals or somewhere else in the July Open.

The North American July Open changes things up as the top two finishers will secure their places in the Americas Regional Championship this summer. In the very realistic scenario that sees Tempo Storm winning again, the second and third place finishers will claim those berths in the regional championship. With Tempo Storm’s dominance, a small field and the double elimination format, a loss in the July Open certainly may not be the end of the road for a team. After all, a treacherous path to an outside chance at the promised land is better than no chance at all.