In World of Warcraft Patch 6.2, we introduced a new series of seven different weekend Bonus Events, two of which feature Timewalking Dungeons—one in Outland dungeons for characters level 71 and higher, and another in Northrend dungeons for level 81 and higher. When you Timewalk these dungeons, your character’s power and gear will be scaled down to a fraction of what they normally are, and as you may have never ventured into some (or any) of these dangerous places, it might be a good idea to prepare yourself now.

Azjol-Nerub was an empire of great strength when the Lich King arrived in Northrend. Despite ferocious resistance, however, Scourge forces managed to overtake the subterranean kingdom and slaughter its inhabitants, the nerubians. Scarred by years of war and abandonment, this vast domain is now occupied on two fronts.

In the Upper Kingdom, undead nerubians patrol the ruins of their homeland, guarding clutches of eggs that will one day bring forth a new generation of Scourge warriors. Meanwhile, in the depths of the Old Kingdom, Ahn’kahet, another enemy stirs: the faceless ones. Little is known of these horrifying creatures, but rumor has it that they answer to an evil power lurking beneath Northrend. Destroying the undead nerubians and their tainted eggs will deal a great blow to the Lich King, but eliminating the mysterious faceless ones is also crucial to reclaiming the fallen empire. 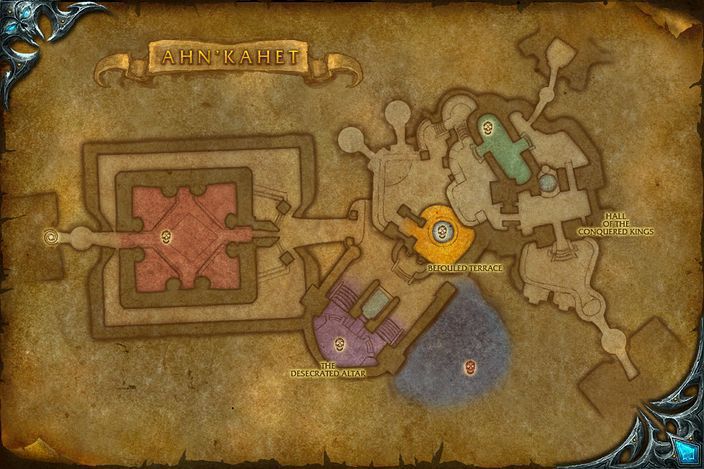 Nadox was once a venerated nerubian leader who taught the ancient ways of his race to generations of broods. When the War of the Spider ravaged Azjol-Nerub, he was overcome by legions of undead. The Lich King reanimated his corpse and bled everything wise and noble from Nadox, forcing him to slaughter his students, friends, and all other nerubians who opposed the might of the Scourge.

After Kael’thas’s failed assault against the Lich King, some of his greatest blood elf followers were slaughtered and raised into undeath as darkfallen. Prince Taldaram is one of these cunning and bloodthirsty vampiric beings. Always seeking to please the Lich King, he has entered the war-torn depths of Ahn’kahet in search of lost nerubian relics that can empower the Scourge’s murderous ranks.

Jedoga dreams of apocalypse. She is rumored to be one of the most fanatical adherents of the Twilight’s Hammer. Under the guidance of the ruthless ogre mage Cho’gall, she learned to twist her shamanic powers to serve the Old Gods. Not long ago, Jedoga journeyed into the bowels of Ahn’kahet to prepare for the glorious day when Yogg-Saron will arise and envelop the lands of Azeroth in shadow.

For ages, fungi and other benign forms of life have thrived in Ahn’kahet’s damp sun-starved caverns. Only recently has Yogg-Saron spread its oppressive will into this isolated ecosystem. The Old God used its immense corruptive powers to warp one of Ahn’kahet’s native beasts into a monstrous creature known as Amanitar, an unthinking terror bristling with the destructive energies of its master.

Amid the Scourge’s invasion of Azjol-Nerub, many of the kingdom’s denizens tunneled underground to escape the Lich King’s minions. Yet some of them dug too deep, exposing the tendrils of Yogg-Saron. Roused by this disturbance, the entity has sent one of its most ancient warriors – Herald Volazj – to cull the beleaguered nerubians and annihilate anyone foolish enough to threaten the Old God.

If your group is superb and wants to go for it, you can also earn:

Get in there and Fight!

What’s your main goal in Northrend Timewalking dungeons? Transmog? Achievements? Will it be your first time in Ahn’kahet? Let us know in the comments below.